I am King Kong's Bitch! 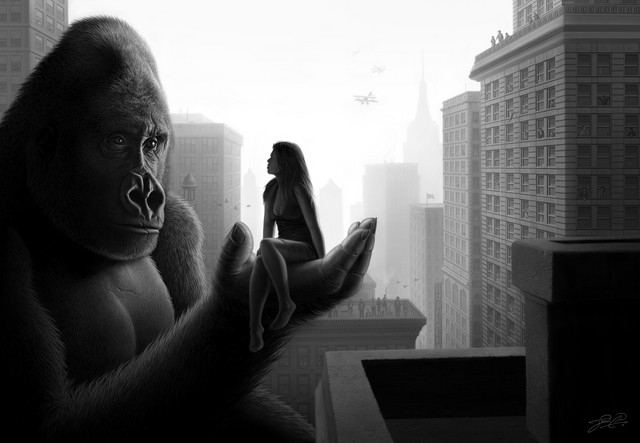 Saw King Kong today, and damn it, I was dazzled.  The visuals were amazing and once the first boring blah blah hour goes by, it kicks it into full gear. Monsters, apes, some blonde chick, nasty leeches, creepy natives, dinosaurs rampaging, the blonde chick again, flying vampire sucking bats, guns galore.  This movie probably won't win oscars save for technical merit, but in this humble writers opinion, the blonde girl, object of Kong's love, did an awesome job of selling human to monkey love.  Lots of subtle nods to the original that would go over most peoples head.

Of course we all know how it ends, and how the original is only 90 minutes. But what Jackson did was to flesh out and expand time for the "falling in love bit" (with the ape, not the guy as his reason for loving her was severely cut) and you don't mind it one bit.  Of course intermixing all these battles in between the waxing poetically of doomed love helped out with some very unique additions to the fight scenes.

So this movie did it all for me.  You could see the end coming and it was like a slo-motion train wreck that could not be stopped, but yet you wanted that gorrilla to get away. (BTW, if you were trying to make time with a woman and took her to this movie, you would have a 50/50 chance of getting in like Flynn, cause yes it has the nice monkey lovin and death scene at the end, but some sequences where the sailors meet their maker, especially one, are really creepy and could kill the mood)

As to the most shocking thing that happened while watching the movie?

Lord Lonely shed a tear during the Kong's death scene.

guest:
I would have to vote with who wrote this.


crashnet:
So it sounds as the Lonely One needs to spank the monkey?